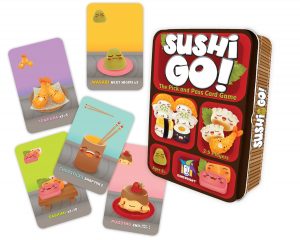 What it is: (From the manufacturer) Pass the sushi! In this fast-playing card game, the goal is to grab the best combination of sushi dishes as they whiz by. Score points for making the most maki rolls or for collecting a full set of sashimi. Dip your favorite nigiri in wasabi to triple its value. But be sure to leave room for dessert or else you’ll eat into your score! Gather the most points and consider yourself the sushi master!

What I love: My 12-year-old daughter is in Board Game Club and this is one of her favorite games, so I love that she’d rather play this than spend time on her technology. I also love that’s it’s so easy to learn and you can play a game quickly, versus, say, Monopoly, which can take hours. It’s also visually appealing—the artwork is cute, bright and colorful—and it works well for families with children of varying ages. The game says 8 and up but I think slightly younger kids might be able to pick it up too. Sushi Go! won a Parents’ Choice Award and an Oppenheim Toy Portfolio Platinum Award.

What I would change: Maybe come up with a version that relies a bit less on luck.